Once again I am lucky enough to have  a tutorial included in my favourite jewellery-making magazine, Making Jewellery.
June's issue 54 includes an array of designs created within the theme of 'Decades'. 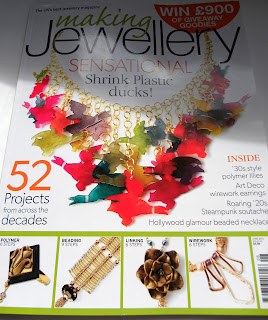 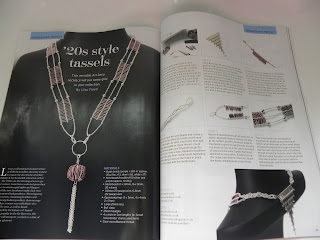 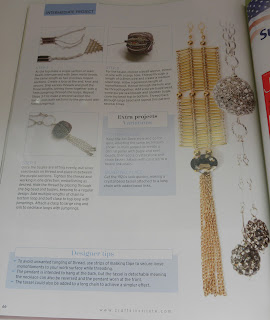 
I've had a fascination with the 1920's since my art college days and couldn't resist tackling a dramatic necklace style, associated with that time.
'Sautoirs' were originally from around the early part of the 19th Century but became popular from the early 1900's and are now usually associated with the 'flapper' style of the Art Deco era.
Features of a  'Sautoir' necklace generally dictate it should be an extremely long and substantial design, culminating in a tassel that may also be removable. The extreme length of the design is to allow it to be draped down the back (think elegant backless dress) or looped at the neck. An extra tassel or feature may also be added at the back. There are fantastic examples of elaborate, beadwork pieces that are quite beautiful.

My inspiration for choosing this piece was an old beaded item (a belt I think, but I wear it as a necklace!) gifted to me by a dear friend. I believe it belonged to her grandmother or aunt and though I am unsure of its actual date or origin, it is one of the nicest items I own and was the starting point for my own design. 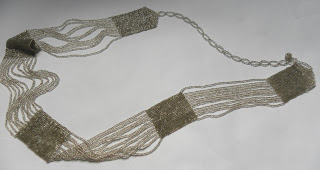 I decided not to use traditional beadwork for this project, instead incorporating some basic wire work by creating loops either side of glass bugle beads and threading them on clear monofilament. Though still long, I opted to keep the length shorter than a sautoir would be, simply to make the piece more wearable. I did use the idea of panels, interspersed with tiny, clear seed beads and re-created
the 'chain' loop effect for the top section.
The tassel was made using both the seed and bugle beads and is attached with a small bolt clasp.
My idea was for there to be an option of detaching it and the necklace can be switched around so the wire and bead section hangs at the front. 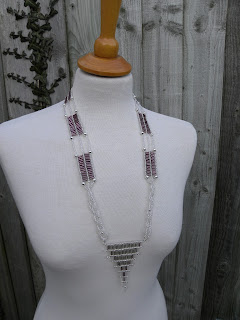 I had several ideas for this project and so for the extra pieces required for the Making Jewellery tutorial, I went for a similar style but using gold and a really simple but effective tassel design using crystal beads and chain. 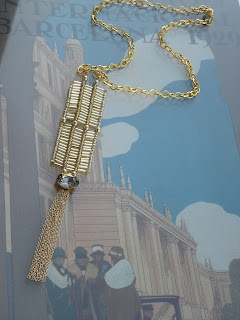 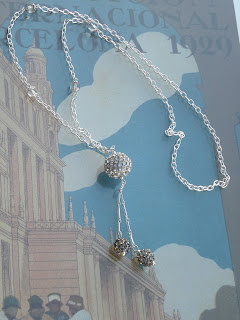 I like jewellery that has movement and many if my Chilichic designs update these ideas to contemporary pieces, featuring detachable pendants and charms. I love the idea of altering the look quickly and having versatility to a piece of jewellery, these may be my favourite style of necklace. 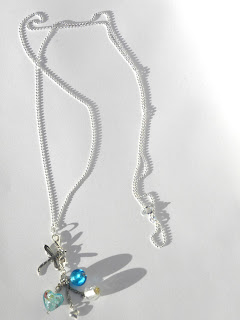 Lisa Floyd
Chilichic Jewellery is handmade using glass semi-precious crystal beads and sterling silver. Designs are limited edition or exclusive. Lisa's work has been featured in several 'Making Jewellery' magazine articles as well as worn on TV and in 'Hello!' magazine by celebs. Lisa is currently a jewellery tutor at Bedwas Adult Education Centre as well as teaching various workshops in the subject.